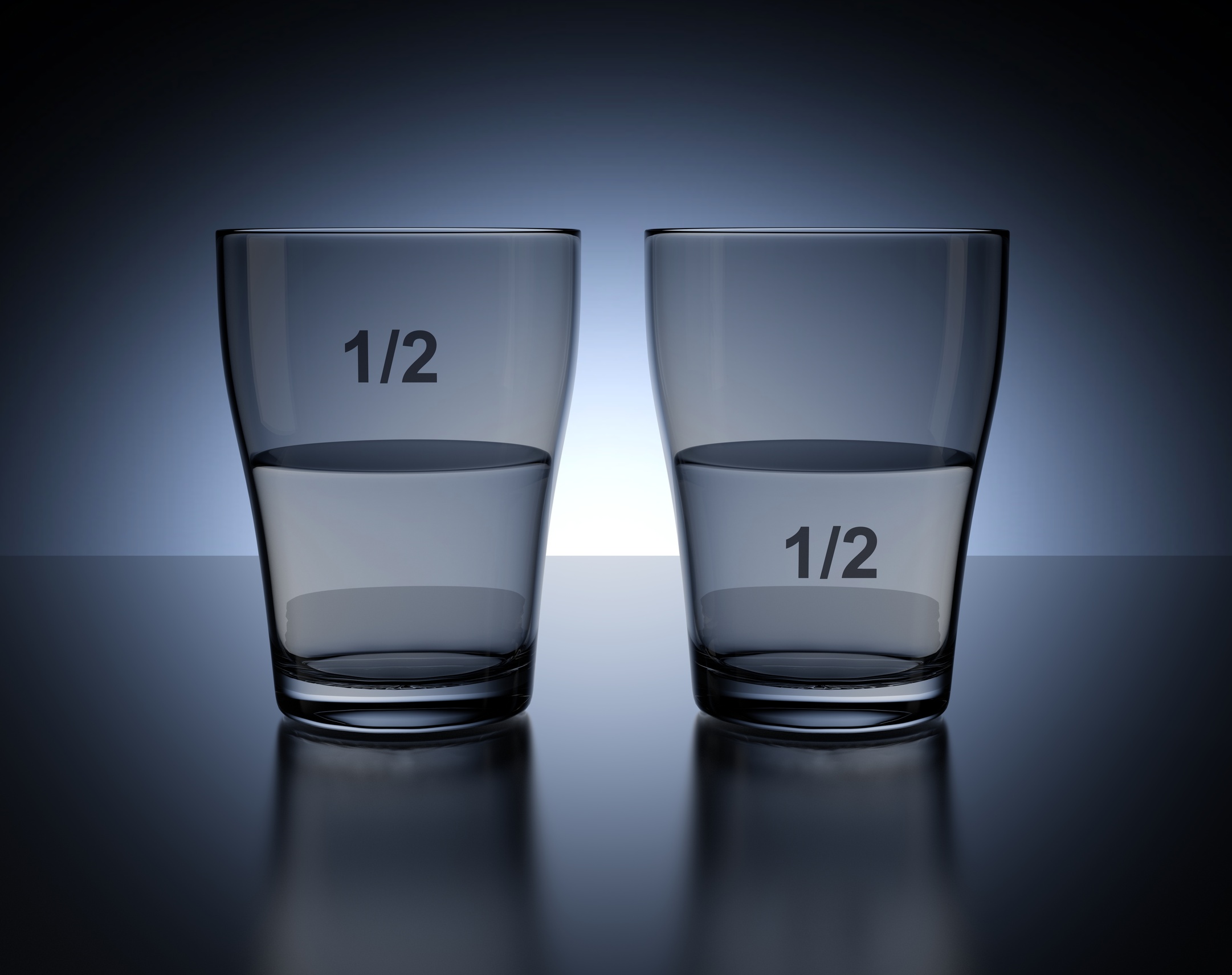 I was listening to a radio program on a drive across town a few weeks ago that was about lying (here to listen). The radio hosts interviewed a pair of behavioral science researchers (Harold Sackeim & Ruben Gur) that were studying how people view the world and how honest they were with themselves. Multiple studies have shown that people who see the world exactly as it is–those that are most honest with themselves–tend to be less happy and more depressed. Try as they might, they simply can’t see the good in life and are consigned to a existence of half-empty glasses.

“They see all the pain in the world, how horrible people are with each other and they tell you everything about themselves: what their weakness are, what terrible things they’ve done to other people. And the problem is, they are right. … We are so vulnerable to being hurt, that we are given the capacity to distort as a gift” (Harold Sackeim).

We’ve all encountered these pessimists (here and here for related posts), yet fortunately, most people aren’t this way. We tend to come into this world with rose-colored glasses.  Humans are instinctively optimistic and hopeful–in spite of the hard reality all around us.  This phenomenon is known as the optimism bias and has been extensively studied by Israeli neuroscientist Tali Sharot at University College London (here for her great TED lecture on this).
To prove this hypothesis, she asked volunteers to predict their likelihood of having terrible things happen (like getting cancer). The real risk of this is about 30%.  Subjects that guessed their risk to be 50% were pleasantly surprised to learn the truth, and later modified their estimated likelihood of getting cancer to 35% on subsequent questionnaires.  Those that had guessed their risk to be 10% were confronted with the bad news that their estimate was too low. They also changed their answers on subsequent questionnaires, but only from 10% to 11%.  A second example of optimism bias is seen in surveys of divorce lawyers.  Though they know the statistics by heart, they dramatically underestimate their own likelihood of getting divorced (in reality it’s 40%–just like everyone else). These kinds of experiments clearly show evidence of the optimism bias.
In the face of these surprising observations, Dr. Sharot asks a very fascinating question: “Hope isn’t rational, so why are humans wired for it?”  Though Dr. Sharot generally uses the term optimism to describe man’s instinctually rosy outlook, it’s clear that what she’s really describing is an innate sense of hope.* The biologist in me sees it as a product of natural selection–hope that causes us to trudge ahead even when the odds seem awful.** The disciple in me sees it as a necessary gift for us to be happy and develop into the beings God wants us to become.
Sharot goes on to demonstrate two consequences of optimism bias.  Firstly, optimism changes subjective reality: the optimistic person feels better about things. Secondly optimism changes objective reality: things actually go better for the optimistic person.  In her words: “Optimism not only relates to success, it leads to success.” These scientific observations rapidly cross over into the realm of things spiritual if we substitute hope for optimism. This is the whole basis of Dieter F. Uchtdorf’s talk: The Infinite Power of Hope.
I tend to look at scriptures extolling faith, hope and charity and walk away thinking I need to have stronger faith and be a better example of the pure love of Christ that embodies charity.  Hope becomes the ugly step-sister that is easily forgotten in the company of her companions.  But since we are born with hope, we must truly need it.

When I see examples neuroscience research uncovering traces of our divine nature, I find it to be incredibly validating. These studies reinforce the gospel doctrine that hope is an essential ingredient for happiness in this life and exaltation in eternity. However, innate hope, like instinctive faith and love, need to be nourished, developed and cultivated. The rudimentary hope we are born with is simply insufficient to form a foundation on which we can stand so as to engage the atonement of Jesus Christ.
__________
* The contemporary definition of hope is “to desire or to expect with confidence”. “Hope” in Scripture means “a strong and confident expectation” that is imbued with a sense of certainty. Scriptural hope is the proverbial “it’s in the bag” version of optimism.
**This instinctive optimism was exploited by the Nazis as they used a small number of SS guards to send 800,000 Jews to die in the gas chambers of Treblinka.  Though confronted with evidences of their impending destruction on every side, they passively submitted and died without resistance.  Never have so few murdered so many. It was systematic and scientific exploitation of man’s instinctive hope.
Comments are closed.