It’s just over a year since I had the opportunity to visit the invasion beaches of Normandy. As I dug out my poppy today, in anticipation of Remembrance Day (Veteran’s Day here in the US), I couldn’t help but be reminded of that day.  It was stunningly beautiful, yet deeply disquieting.

We visited Omaha and Utah beaches, Pointe du Hoc, and the hedgerows of the surrounding countryside.  We finished the day watching them retire the colors at the Normandy American Cemetery that overlooks Omaha Beach and the English Channel. I will not forget the palpable sense of sadness and gratitude I felt there, as I looked at 9387 white crosses and stars on the graves of strangers with whom I felt connected. Engraved in the white stone was a name, their home, and the day they died in June 1944. I am not so naive to think that every man interred there was a hero, but I am certain that their sacrifice for their country, their families, their brothers, and a continent of strangers will not go unrewarded in eternity.

Having grown up in a town of 5000, I have always had a tendency to think of these kinds of statistics in terms of the size of my town.  Everyone in my town would fit in that cemetery–twice.  And that was just the US forces lost in the battle of Normandy.  There are other cemeteries for the British and Canadians, for the French and the Germans.  I have read estimates that 60,000,000 people (2.5% of the world’s population) lost their lives in World War II. It would take 6,000 cemeteries like this one to hold them all.  It is staggering.

When November 11 comes around, put on a poppy, or fly a flag, or take a few moments to pray and be grateful–lest we forget. 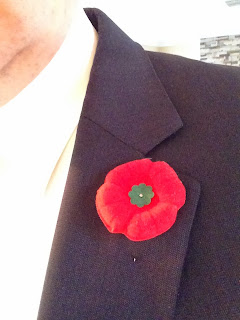