The other day, Tate was looking at treasures in my den and came upon this rare find. The beautiful patina indicates it comes from a bygone era; it’s safe to say there are only a handful in existence. Recognizing a genuine antiquity when he saw it, he immediately asked the golden question: “Can I have this when you die?”

Now that kind of question could easily precipitate a full-blown panic attack in any other middle-aged Mormon male.  The quiet little voice inside your head suddenly starts shouting: My kids are already jockeying for position for when they read my will! Do I really look that out of shape? But not so for me. Tate has been asking the golden question for years. (We chalk it up to a racer’s instinct for the advantage of the inside line . . . plus it never hurts to ask).

That’s right folks, it was evident from a very early age that something special was going on here. It was so apparent that someone had my name engraved on a trophy! I even remember the Bishop shaking my hand and recognizing me in front of the whole congregation at church on Sunday.  The covetous look in my son’s eyes as he held my ‘major award‘ brought these memories rushing back to me in an instant. I took the trophy and was about to launch into an extended monologue of self-adoration when I noticed the dates on the plaque: 1967-68. 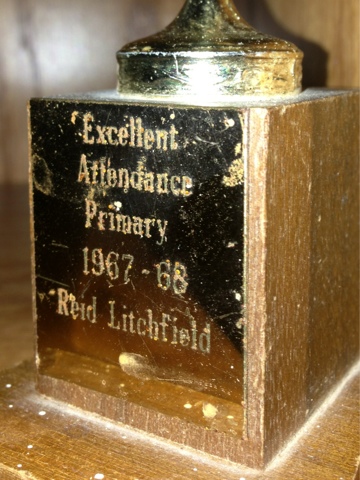 My gloating quickly ended. I turned 4 in 1968, which means I was a SUNBEAM. It is quite probable that I couldn’t even tie my own shoes, let alone do anything to ensure that I had perfect Primary attendance. What first appeared a recognition of my precociousness was in reality a monument to my mother. Though she’s been gone for many years, I feel like she’s still cheering me on. What a mother I have. Were the truth fully known, we could probably erase our names from the ‘major awards’ in our lives and instead inscribe ‘presented to Reid Litchfield on behalf of his mother’.*  Thanks mom. Sorry I almost stole your thunder.
______
* I think after 25-30 years we could arguably substitute ‘wife’ for ‘mother’ on the trophy.

One thought on “Stealing Thunder”