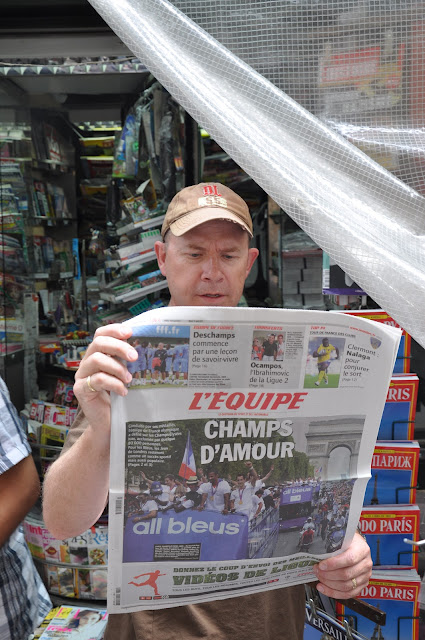 I’ve always wanted to get a picture of me “reading” a genuine issue of L’Equipe. [1]  It is a French sports newspaper that promotes the Tour de France. Our recent trip to Paris afforded me the opportunity. I think a passerby could reasonably conclude that I was fluent in French.  Nothing could be further from the truth.  I’m just a good pretender.  It’s a skill I’ve been working on since I was a little kid. We used to say ‘let’s pretend’ as a prelude to any of a thousand adventures we then dreamed up. We were experts then, and I’m still at it.

It’s a fun picture, but the idea of pretending has me on another wild tangent. It seems that I spend a fair bit of time pretending in a day. I say “it’s nice to see you” to a patient that I dread seeing; I respond “I’m great” in the midst of a terrible day.  And that’s just the beginning. I suppose that if this were the end of it that would be well and good. After all, a certain amount of pretending is just good manners. Problems can arise when we begin to believe stuff that’s just pretend.

As imperfect creatures trying to be better, we are all tainted to some degree with the ugliness of hypocrisy. [2] The challenge is to not use our skill in pretending to avoid owning up to who (and what) we really are. To do so prevents us from facing reality; it keeps us from taking care of the business at hand and becoming better. It is possible to have such an elaborate facade that we convince ourselves it’s more than just ornamental, but real. I’ve seen people that are surprisingly adept at developing multiple alter-egos to put on when it suits them: church vs. work vs. home vs. private personas. How often have you come to realize that you really didn’t know someone you thought you knew because they were pretending?

The WYSIWYG principle is a knife that can cut both ways when it comes to showing our true colors. Hopefully we’re trying to develop the righteous constancy that was emulated by the stripling army of Helaman that has been recently on my mind.  There was not a lot of pretending going on there: “they were men who were true at all time in whatsoever thing they were entrusted (Alma 53:20).

[1] The title means The Team.
[2] The last few paragraphs of this article on profanity illustrate this hypocrisy nicely.